What is Lap-band surgery?

Lap-band surgery, also known as laparoscopic gastric band placement or gastric banding is a minimally invasive weight loss procedure that involves placing a thin, adjustable silicone band around the upper region of the stomach to limit food intake. Once in place, the band decreases the flow of food between the upper and lower region of the stomach, thereby causing individuals to feel full faster. This type of weight loss treatment ultimately helps people gradually lose weight by eating less.

There are a number of factors that doctors evaluate in order to determine whether an individual is a good candidate for lap-band surgery. Suitable candidates must:

Individuals with a BMI that is higher than 30 may also be considered for this procedure if they are experiencing obesity-related health problems.

In addition, the candidates need to be willing to make substantial changes to their lifestyle and eating habits, while committing to be frequently monitored by a doctor.

Individuals who smoke and drink excessively, have lung or heart disease, and those with inflammatory diseases that affect the digestive tract such as Crohn’s disease, severe esophagitis, or ulcers are not optimal candidates for lap-band surgery.

Other serious conditions such as chronic pancreatitis, cirrhosis, lupus, and high blood pressure in the veins also make individuals ineligible for this surgery.

Lap-band surgery is performed under full anesthesia and it takes one to two hours to complete. 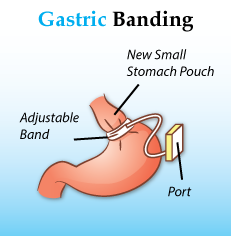 During the procedure, a surgeon makes a small incision and then inserts a thin tube with a light and camera on the end of it that is called a laparoscope. This tool is used to properly position the band.

The adjustable band is similar to a wristwatch, and it’s fastened around the upper region of the stomach to create a tiny pouch that controls the amount of food a person eats. It contains sterile salt water that allows a doctor to inflate or deflate the band by changing the amount of salt water inside of it.

The band is also connected to a tube with an access port at the end of it. The port is placed directly below the skin during the surgery and thin needle can be inserted into the port to adjust the size of the band by either adding or removing fluid from it.

A surgeon can adjust the band as needed to regulate the rate of weight loss.

There are many benefits of Lap-band surgery, such as:

Risks and side effects

As with any surgical procedure, there are potential risks and side effects. Some risks of Lap-band surgery include:

The hospital stay following the procedure is typically 1 to 2 days, and individuals can usually return to work after one week. Most patients fully recover by the end of the second week.

The first follow-up appointment is usually scheduled two weeks after the surgery. The first assessment to determine whether the band needs to be adjusted is conducted around week six.

The weight loss goal is 0.5 to 1 pound per week and the band is adjusted based on an individual’s weight loss needs. Additional adjustment reassessments are performed every six weeks until the sixth month, and then the appointments are scheduled every three to six months.

After about two years, a weight loss goal of more than 50% should be reached.

Insurance companies may cover the cost of the procedure if weight-related complications such as heart disease or diabetes developed due to excessive weight gain.

In addition, most medical offices offer payment plans and financing options if an insurance plan does not cover the cost.

Gastric Bypass: Before the introduction of lap-band surgery, a gastric bypass was the most common type of bariatric surgery, which refers to an operation that leads to weight loss by altering the digestive system. A gastric bypass entails using staples to divide the stomach into two parts, a small upper section called a pouch and a large lower section. The small pouch is connected to the small intestine in order to completely bypass the larger portion of the stomach. The pouch allows individuals to feel full after eating smaller amounts of food, and this leads to weight loss. However, this procedure is permanent and is associated with various complications such as leakage from the staples, an intestinal blockage due to scarring, or a stomach injury, among others. Unlike a gastric bypass, lap-band surgery is minimally invasive and reversible. The band is also adjustable. In addition, complications associated with gastric banding are usually minor in comparison to other procedures such as a gastric bypass. Due to these features, lap-band surgery has rapidly gained popularity as an effective alternative for weight loss. If an individual is not a candidate for lap-band surgery or the person underwent this procedure and it failed, an alternative such as a gastric bypass may be recommended.

Sleeve Gastrectomy: Another effective weight loss procedure is sleeve gastrectomy. This type of surgery involves removing a portion of the stomach and forming the remaining section into a sleeve. This reduces the stomach’s size and limits the amount of food a person can consume. As a result, the person begins to feel full after eating small meals and this usually leads to about 80% loss of excess weight over a period of two years. This procedure is less invasive than a gastric bypass because it does not involve connecting a portion of the stomach to the small intestine and nothing needs to be placed inside the body (e.g., gastric band). However, the surgery is permanent.

What happens if I become pregnant after undergoing lap-bad surgery?

A gastric band is safe enough to be left in place during a pregnancy. It can also help manage weight gain. More specifically, if a mother needs to slightly increase her intake to provide proper nutrition for her growing baby, the band can be deflated. It can also be tightened to promote weight loss in pregnant women who are not losing significant amounts of weight.

Can the band be removed?

The placement of the band is not permanent, and it can be removed if it does not produce weight loss after several months. It can also be removed if it slips off, injures the stomach, causes other unpleasant side effects, or if long-term weight loss occurs and the individual believes that the desired weight can be maintained without it.

How long can the band be left in place?

Gastric bands deteriorate over time and eventually need to be removed or replaced. A band can remain intact for 10-12 years, but once it begins to deteriorate, additional surgery is required to replace or remove it.