Cellulite – properly known as “gynoid lipodystrophy” – is a well-known and much despised cosmetically distressing problem. Most people know what cellulite is; the dimpled, “orange-peel”, or “cottage cheese” appearance that shows up on the thighs, buttocks, and hips.  But many are unaware that as it progresses, scarring can occur under the skin – a process known as sclerosis and fibrosis – resulting in nodules under the skin, dry skin, thinning of the skin, and even soreness. It’s an unsightly problem, affecting 85-98% of women at some point in their lives.

What are the causes?

Cellulite is nothing more than fat that forms beneath the skin. Its bumpy appearance is a result of the fat pushing against scarred connective tissue. This pressure results in the uneven, dimpled appearance. It is difficult to elucidate exactly what causes cellulite because it happens to the vast majority of women. However, a number of theories exist about the exact causes of cellulite, such as: 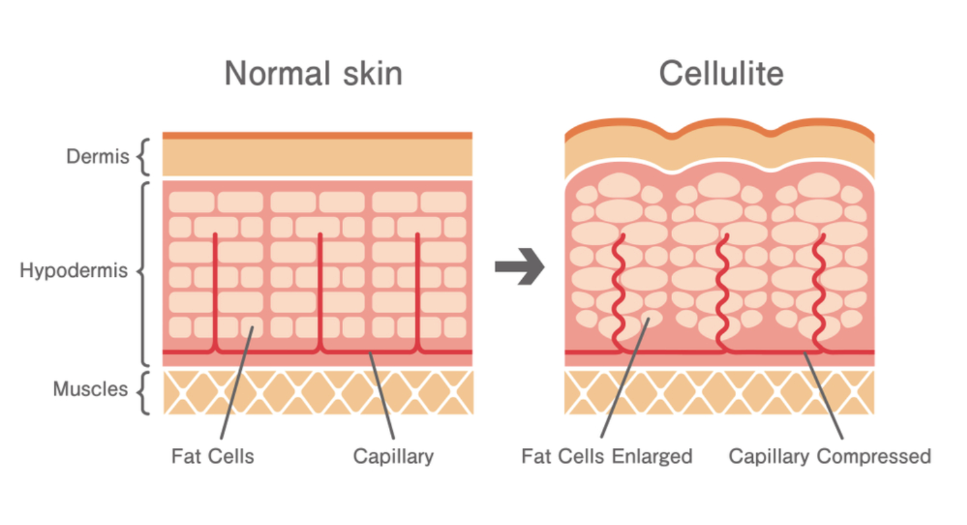 Female sex hormones (especially estrogen) are likely one of the main factors that play a part in cellulite formation. Although some men do get cellulite, it is primarily seen in women. When cellulite occurs in men, it tends to occur in individuals who have a medical condition that causes higher levels of female sex hormones.

Cellulite formation accelerates during certain key hormonal events in women’s lives: during puberty, pregnancy, when taking the oral contraceptive pill, and with the menopause.

As well, genetics play a role in cellulite formation, and there is therefore a strong familial association.

Lifestyle also plays a role. A high-calorie diet that is rich in fats, and a sedentary lifestyle contribute to the development of cellulite. This not only promotes fat accumulation in the body, but also leads to poor muscle and skin tone, both of which contribute to the unsightly effects on the skin.

Smoking and alcohol use both stimulate fat accumulation, and cause other deleterious effects that promote cellulite formation (such as dehydration, poor circulation, and free radical accumulation).

Although the accumulation of body fat is a major cause of cellulite formation, people do not necessarily have to be overweight or have a lot of body-fat to have cellulite.

Can men get cellulite?

Women are more likely than men to have cellulite, but men are nonetheless susceptible. Cellulite most typically affects the upper outer thighs, the posterior thighs, buttocks, hips, and abdomen. However, it can also occur on the breasts, lower abdomen, upper arms, and even the nape of the neck; basically, anywhere that female-pattern fat deposits occur.

There are a number of treatment approaches directed at cellulite, using a variety of modalities. The general types of treatments are:

Topical agents: The main limitation with topical agents is that they are not able to penetrate deeply enough to reach the cellulite tissue in sufficient quantities. The main types of topicals on the market are methylxanthines (such as caffeine, theophylline, or aminophylline), and retinoids (vitamin A and its derivatives). The former are believed to dissolve fat tissue (lipolysis), while the latter are believed to work by thickening the skin, improving circulation, and stimulating new supportive connective tissue growth. Topical agents are not very effective, because they lack the ability to make the extensive changes to fat and connective tissue that are required to make a visible difference in cellulite.  Indeed, well-designed clinical studies have not shown topicals to have any significant effects on cellulite. As well, consumers should be careful, because many of the scam products on the market are topicals.

Mechanical stimulation: This involves either massage or pressure delivered by a device. The idea is to damage fat cells and improve lymphatic drainage of fat. The effectiveness of mechanical stimulation in treating cellulite is unclear, due to a lack of well-designed clinical studies.

Radiofrequency: This involves delivering thermal energy (heat) to the affected area through some kind of a device. The idea is that the heat dissolves fat (lipolysis), tears down collagen that is involved in scarring, and stimulates new healthy collagen growth. Some of the newer generation devices have proven effective in clinical trials in reducing the appearance of cellulite – particularly the Velasmooth and Velashape devices, which combine thermal energy with vacuum suction, mechanical stimulation, and electromagnetic energy.

Laser: This treatment approach uses laser heat energy to improve circulation, and breakdown the collagen involved in scarring and replace it with healthy collagen growth, but it does not have any significant effect on breaking down fat tissue. Nevertheless, laser treatment has had significant positive effects in clinical trials, mostly due to improving the appearance and smoothness of skin, specifically by reducing dimple depth, smoothing skin contour, increasing elasticity, and increasing skin thickness.

Acoustic wave therapy (AWT): This energy-based approach involves sending pressure waves into the cellulite to promote lipolysis, improve circulation and lymphatic drainage, and to stimulate new collagen growth. Two types are available. The first is focused shock waves (also known as extracorporeal shockwave therapy (ESWT)), and the second is radial shock waves. A few, but not many, clinical trials have shown AWT (especially ESWT) to have a significant effect on contour, thickness, and appearance.

Subcision: This invasive technique involves inserting a large-gauge needle into the skin and swirling it around in a fan-shape (using generous amounts of local anesthetic, of course). The idea is to break up all the fibrous scar tissue that pulls on the skin and causes it to dimple. A specialized instrument system (Cellfina) has been approved by the FDA to provide standardized subcision treatments, and it appears from a (very) preliminary study to produce significant results lasting at least three years.

Injectables: There are two types of injectables used to treat cellulite. The first are collagenases – chemicals that break down collagen. These are meant to tear down the fibrous scarring that causes the unsightly skin changes associated with cellulite. Clinical trials are presently underway to assess the efficacy of collagenases for treating cellulite. The other injectables used are dermal fillers. They’re gels that are injected under the skin to provide volume that lifts up and smooths the skin. These have been shown to have significant effects on the appearance of the dimpling and skin irregularities associated with cellulite, but their effects are temporary, generally lasting 3-6 months.  Some injectables commonly used to treat cellulite are Sculptra Aesthetic and Radiesse dermal fillers.

High intensity focused ultrasound (HIFU): This technology has been in use for decades for breaking up kidney stones, uterine fibroids, and tumors; recently it has been applied to breaking up fat tissue in cellulite. The procedure appears to have merit, with studies showing improvements (patient satisfaction ranging from 47-86%) with minimal after-effects.

Liposuction: Liposuction removes fat, but it targets deep fat, while cellulite is more superficial. As such, traditional liposuction has little or no effect on cellulite, and may even worsen the skin irregularities. Although work is being done on developing superficial liposuction techniques aimed at treating cellulite, at the present time liposuction is not a viable treatment option for cellulite.

So which treatments really work?

Many of the most effective treatments for cellulite involve combinations of the above treatment modalities, such as subcision with Cellfina, RF and mechanical stimulation.To find the right treatment for you, it’s recommend patients schedule a consultation with a qualified provider in your area.

There are many sham procedures and products on the market that prey on consumers in distress. Many of these approaches are non-standardized, not controlled by the FDA, and have little or no quality evidence (at the present time) to support (or refute) them.

Although some risk factors for developing cellulite are unchangeable – such as genetics and being female gender – there are a number of modifiable risk factors that you can change to limit the development of cellulite. These include:

The cost of cellulite treatments can fluctuate significantly between practitioners, locations, and specific procedures.

We covered many varied procedures in this article, so there will be a lot of cost disparity between them. This is probably why the American Society of Plastic Surgeons leaves the average cost of cellulite treatments blank in its annual average cost reports.

Some treatments require expensive specialized equipment, so these tend to be more expensive. With such a degree of cost disparity, the only way to get an accurate measure of how much a cellulite treatment is going to cost you is to speak with a qualified doctor about a specific procedure.