Dysport, also known by ‘Reloxin,’ is a cosmetic injection used to treat facial wrinkles. Similar to Botox Cosmetic, it contains a diluted version of the botulinum toxin. Dysport is injected to relax facial muscles, smoothing the wrinkles caused by movement of these muscles. This is a popular treatment for frown lines, laugh lines, and other facial folds.

Some facial wrinkles are caused by the muscles under the skin exerting too much tension on the skin, thereby creating creases.  When we are younger, our skin is supple and elastic enough to remain smooth and even despite the pull of these muscles. However, as we age and our skin loses its elasticity, the effects of these muscles produce creases and wrinkles. Dysport works by weakening or paralyzing these muscles, thereby releasing the wrinkle-causing tension on the skin.

Is it right for you?

Dysport is primarily used for the treatment of moderate to severe glabellar lines, which are the vertical lines located between your eyebrows. This is its only FDA-approved cosmetic use.

However, Dysport is sometimes used “off-label” (without FDA approval) for the treatment of forehead lines and “crow’s feet” in the corners of the eye (the lateral canthus).

Dysport is not meant for cosmetic use in people over 65.

Not all facial lines and wrinkles that come with age are caused by the muscles under the skin. Some are caused by loose skin, loss of fat tissue under the skin, gravity, and loss of the structures that support skin (such as the collagen and elastin matrix under the skin). Dysport is not effective for these kinds of aging changes.

You should not have a Dysport treatment if you are allergic to cow’s milk, or have a rash or infection at the injection site.

You should not have a Dysport treatment if you have a neuromuscular disease, or are pregnant or breastfeeding.

Dysport is injected to relax facial muscles, smoothing the wrinkles caused by these muscles. Dysport is FDA-approved for improving the appearance of moderate to severe glabellar lines (also known as “frown lines,” the wrinkles that occur between the eyebrows). Dysport is also used for medical purposes, such as treating: 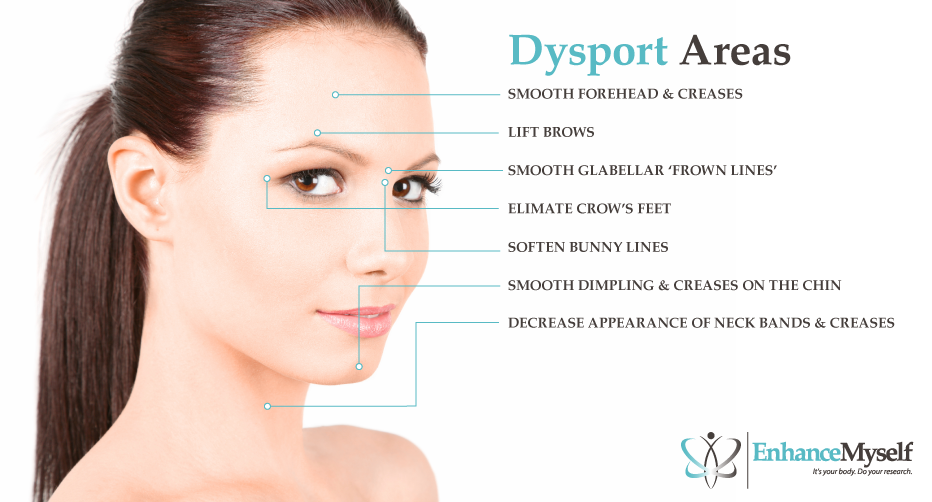 Dysport injections are performed in a doctor’s office, and no anesthesia is required. However, some injectors may use ice to numb the area, or may offer a topical or local anesthetic.

After carefully measuring the amount of solution to be injected, the doctor then injects the Dysport into the targeted facial muscle using a thin needle. The entire treatment takes only about 10-30 minutes.

After the doctor has completed the injections you are free to leave the office immediately.

Dysport injections are known as a “lunchtime procedure” because you can usually return to your daily activities immediately after a treatment. Ice can be applied to reduce any bruising or swelling. A few precautions are appropriate for the rest of the day after having a Dysport treatment:

When to expect results

The results of a Dysport treatment are not immediate. Results begin to appear 3-5 days after the injections, with maximum results taking up to two weeks.

How long will your results last?

The results usually last for 3-4 months. Depending on the area being treated, smoothing the wrinkle may require a series of 3 to 5 injections; the spacing and amount of solution injected into each treatment location depends on the desired results.

Although Dysport injections are a non-invasive alternative to surgery, the procedure is not without risks. Dysport treatments may have side effects, which your healthcare professional should discuss with you during your consultation. The most common adverse reactions following glabellar injections with Dysport are:

Before Dysport treatment, speak to your doctors about all the potential risks and side effects.

The Dysport product usually costs around $4 to $8 per “unit,” which is the basic unit of measure of botulinum toxin products. Botox, by contrast, costs about $10 to $20 per unit. However, because Dysport is more dilute than Botox, it takes about 2½-3 units of Dysport to get the same effect as 1 unit of Botox. For example, it takes approximately 50-60 units of Dysport to treat glabellar lines.

On average, the total cost of Dysport treatments will be around $400 to $800 depending on several factors, such as:

Dysport holds some advantages over Botox. Since it is made with a smaller protein “load” than Botox, your body will not try as hard to attack it, so results should last a little longer. That said, this is still being debated and studied.

Also thanks to this smaller protein load, Dysport’s results appear slightly faster than Botox: 2-5 days, rather than 4-7. This makes it more effective if you have a date or special event on the horizon.

Once injected, Dysport “spreads out” somewhat more than Botox. This can be both a good thing and a bad thing. It’s very useful for treating larger areas, like the forehead or armpits. It means fewer injections, along with less swelling, bruising, and general discomfort. On the other hand, if administered by an inexperienced doctor, Dysport can spread into unwanted areas, causing negative side effects like blurry vision or drooping eyebrows. It also means that Dysport might not work as well for small areas, or thicker muscles, like between your eyebrows or around your mouth.

Dysport is also more diluted than Botox, which means you might require more treatments to acquire the same result. However, this means that Dysport is often cheaper per unit, which can potentially translate to a less expensive total cost, depending on your treatment.

In most cases, the deciding factor between Botox and Dysport is a matter of preference for either you, or the doctor administering your injection. There are several differences between the two, but mostly they’re remarkably similar.

Other Botulinum toxin A injectables include Xeomin and Jeuveau injections.